Need tree service in Safety Harbor, Florida? There are typically three reasons to trim or prune a 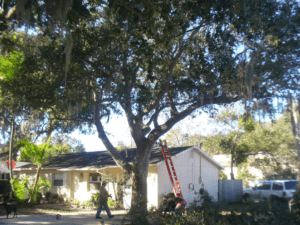 tree: safety, aesthetics and overall health of the tree. The health of your tree will affect its overall appearance. That is why it is important to have a tree service company check its health periodically for trimming or pruning. While there may be times you can trim a tree yourself, it is best to call a licensed and insured tree service company near you to do it.

Our tree service in Safety Harbor, Florida is a well-established, professional, and distinguished tree service company that offers tree trimming and tree removal in Safety Harbor. Allen’s Tree Works team is comprised of some of the most knowledgeable and competent tree service professionals in the Clearwater/Safety Harbor area. We carefully plan and execute each job with tactical precision. We work with residential homeowners, commercial and residential property management groups. If you have a question or concern about a tree, please give us a call. We provide free estimates.

Thinking you may need a tree removal in Safety Harbor? Deciding whether or not a tree should be removed can be a difficult decision and you should consider the following when assessing its future. How old is the tree? Is the tree dead or dying? What will the property look like after it is gone? Can the tree be removed? How much will it cost? Who do I call?

You should never attempt to remove a tree yourself and should always contact a tree removal professional. Have them evaluate how healthy your tree is before removing it. If more than 50% of a tree is damaged then it should be eliminated. If the damage is less than 50%, other measures can be taken to save your tree if you so desire.

How will the property look after the tree is removed? That is always something to look at as well. Price is another factor. How much will it cost to have the tree removed? Prices vary based on the tree, it’s location and what might be obstacles when removing it. At Allen’s Tree works of Safety Harbor, we are a family owned, licensed & insured, affordable tree removal company in Safety Harbor. We also do tree service in Palm Harbor, Clearwater, Dunedin and Largo.

The area has been inhabited since the Stone Age. In June 2008, a 6,000-year-old spearhead was found at Marshall Street Park. The inhabitants of the area at the time of Spanish exploration were the Tocobaga people, who lived in villages around Tampa Bay. The adaptation of this culture relied on wild resources. Safety Harbor sites have yielded pottery, and artifacts of copper, shell, and stone. The Tocobaga were known for constructing various ceremonial and communal mounds to bury the dead. Most of these mounds were destroyed in the early 1900s due to development. However, one of these ceremonial mounds is still visible in Safety Harbor’s Phillippe Park (see photo). Shells found in these mounds were used to pave city streets.

In 1528 Spanish explorer Pánfilo de Narváez landed in the area, followed by Hernando de Soto in 1539. Safety Harbor (formerly known as Worth’s Harbor) was first homesteaded by Count Odet Philippe, a French nobleman who is credited with introducing the grapefruit to Florida in 1823. The name Safety Harbor originated from the early 18th century, when pirates were a substantial influence in the area. Once ships reached this area of the bay, all threats from pirates were gone, and it was commonly referred to as a “Safe Harbor”.